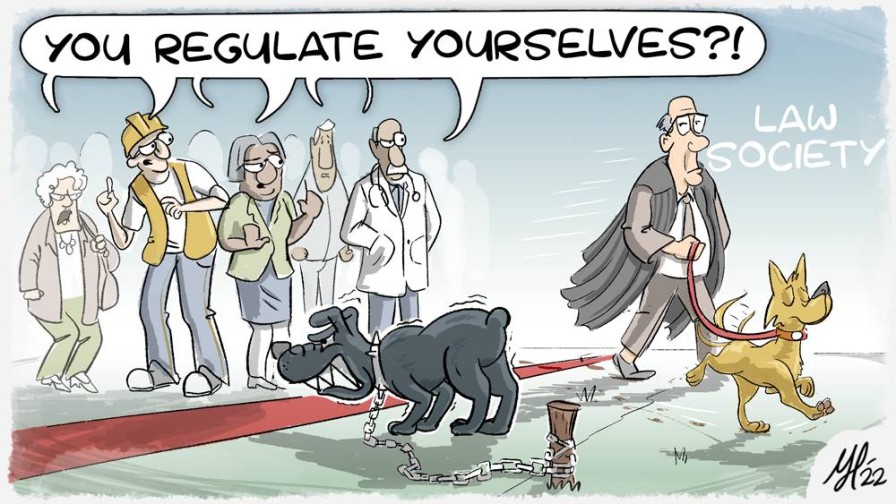 A few years ago, a couple of academics at Princeton University surveyed Americans about the trustworthiness of professions.

They were looking at what made an effective communicator, being a mixture of capability and knowledge as well as warmth and trustworthiness.

Lawyers, CEOs, accountants, scientists and engineers all scored highly for competence, but low for warmth.

In fact, lawyers were the lowest on the warmth scale of those professions: people respected them and thought they were good at their jobs, but they also didn’t like them one bit and therefore didn’t trust them.

The study was picked up by some prominent legal industry publications, with a couple highlighting one finding with exuberance: “Lawyers are ranked on par with prostitutes when it comes to trust”.

The legal profession has long been seen by parts of the public as untrustworthy, and lawyers have also scored lowly in similar New Zealand surveys. Shoeshine should quickly note that journalists regularly fare much, much worse.

That has led to a perception the New Zealand Law Society, both the regulator and membership body for the profession, is run by lawyers, for lawyers, and has an unmanageable conflict of interest.

As such, the society commissioned a wide-ranging independent review of its structure and functions last year, with that independent review’s discussion document being released for consultation last week. Recommendations are due to be made by the end of the year.

One of the most interesting options up for debate is whether a new, independent regulator should be established.

The profession is sitting tight – “watching this with interest but no firm opinions at this stage” was the word from one prominent law firm – but in Shoeshine’s view such a move is a no-brainer.

The society’s conflict of interest is unusual among regulated professions in New Zealand and increasingly different from overseas legal jurisdictions.

But while hiving off the regulatory arm seems obvious, international experiences show it’s not always the easiest thing to do.

The review panel’s 34-page discussion document says the Law Society has 155 staff, split 75 regulatory, 48 representative and 32 support. It is said to be heavily reliant on volunteers, including on its Standards Committees which help assess complaints (more on that later).

Over the past three years, meanwhile, the society has on average received $22 million a year for its regulatory functions and $8m a year for membership services.

Practising fees have increased over the last two years to $1,290 in 2022 but because of the strong growth in practising lawyers, regulator costs for individuals have fallen. In real terms the practising fee has also fallen by 12% since 2010.

As it stands, the regulatory functions include issuing practising certificates and keeping a register of who holds them, setting rules, managing complaints, launching disciplinary prosecutions and advising on law reform.

The membership arm, meanwhile, advocates on behalf of the profession. Membership is voluntary, but lawyers with a practising certificate can become members for free. This part of the society’s services are funded through specialist group fees, conferences, training and investments.

It’s also had a publicised “perfect storm” of other challenges, such as having to move out of its Wellington HQ, which led to a $3m loss in the year to June 30, 2020, and has seen changes at the top of its executive.

Consultation closes on August 12 and includes three webinars next month, with the panel due to report back to the Law Society’s board by the end of the year.

The panel specifically highlighted that it was exploring whether a new independent regulator should be established.

“The legal profession is currently regulated by the Law Society. However, the Law Society is also a membership body for lawyers, with a duty to promote the interests of its members,” Paterson said.

“This conflict of interest is unusual for other regulated professions in New Zealand. A number of overseas jurisdictions have recognised this conflict and created an independent entity to regulate legal services.”

The panel had also heard concerns the current model for handling complaints about lawyers was not working effectively for both consumers and lawyers, with Paterson labelling it slow, adversarial and lacking in transparency.

“And there are perceptions that it’s not sufficiently independent.”

The panel also said it would seek views on promoting a positive and diverse culture which is more inclusive of tikanga and te reo Māori, as well as addressing how to handle inappropriate conduct within the profession.

Allowing other providers of legal services into the legal market, beyond pure lawyers (and as seen in other markets), is also on the table.

The Law Society, for its part, last week labelled the process a “once-in-a-generation review” and encouraged feedback.

Law Society president Jacque Lethbridge commented: “The discussion document is a critical step in the legal profession’s work towards ensuring it examines itself root and branch to ensure the Law Society is a fit-for-future body, ready to tackle the challenges and opportunities ahead.”

The panel and Law Society both declined to comment further at this stage, for fear of interfering in the process. Multiple law firms were also unwilling to comment.

But the discussion document does provide some detail around how setting up an independent regulator could work, and why the incumbent complaints system is, well, on its knees.

Let’s start with the latter.

The Law Society has 22 Standards Committees, made up of volunteer lawyers and lay members, who assess all complaints and make decisions on whether to take action or refer to the Lawyers & Conveyancers Disciplinary Tribunal (an independent office under the Ministry of Justice).

On average, the law society has received 1467 complaints a year for the last five years. Close to 90% of those are dismissed with no action.

As the discussion document points out, however, the process is inefficient, lacks consistency and transparency, and has a perception of not being independent.

Some of the stats certainly feed into that: it’s taking, on average, 259 days to resolve a complaint, and 463 days where a complaint results in some sort of order, such as a finding of unsatisfactory conduct.

Furthermore, decisions only need be published as necessary or where there is a public interest.

“Over the past 10 years a Standards Committee has concluded that a lawyer’s conduct met the threshold of ‘unsatisfactory conduct’ in 1751 occasions, but only disclosed the lawyer’s name in 62 of those cases,” the discussion document says. “The legislation surrounding name publication is unnecessarily complicated and obscure.”

Part of the issue is resourcing. Another is a very prescriptive legislative framework, with the Law Society unable to “triage” and dismiss cases which are obviously frivolous.

The Law Society has, in fairness, been pushing for changes with the government to improve its complaints system, but these require amendments to its legislation.

In the meantime, it has adopted recommendations from a 2018 inquiry undertaken by Dame Sylvia Cartwright, including mandatory reporting of misconduct, clearer behavioural standards, and whistle-blower protection. The rules came into force from July last year.

By lawyers, for lawyers

It’s important to note the Lawyers and Conveyancers Act 2006 did move the legal profession from full self-regulation to co-regulation alongside the Minister of Justice.

But as the discussion document notes, in reality the Law Society has a lot of autonomy as a regulator and representative body.

“Since the Act was passed in 2006 the NZLS has endeavoured to strictly separate these functions to avoid perceptions that it may be conflicted.”

And yet those perceptions of a conflict remain and are almost inescapable.

On the one hand, the discussion document says, there might be a reluctance to set fees at a level needed to fulfil its regulatory duties (noting that fees haven’t scaled up despite ongoing constraints).

Other stakeholders have told the panel, however, that the current model also means the legal profession does not have a strong advocacy body.

Finally, and this is the killer: “There is also a perception among elements of the public that the NZLS is an entity run ‘by lawyers for lawyers’”.

A table (below) sets out how unique this situation is among other New Zealand professions, as well as the changing tide of legal regulators and membership bodies overseas.

There are three options: no change, operational separation, and establishing a new independent regulator.

The latter two are both said to come with significant cost implications, however, with research provided to the panel suggesting the cost of the Law Society’s core regulatory functions is at the upper end among international peers.

The discussion document specifically points to the example from England and Wales (the second option of those mentioned above), where the regulator – the Solicitors’ Regulation Authority – is part of the Law Society although functionally independent.

Another issue here, however, not noted in the discussion document, is that the division of the SRA and Law Society has been a bit of a nightmare.

It’s a long story but essentially the separation led to a bit of a turf war, with the UK Law Society being seen to have regretted losing the regulatory function and being prone to put pressure on the SRA.

The UK Treasury had then in 2015 backed proposals to split the two completely, which was backed by the SRA and opposed by the Law Society. One part of the issue was the loss of practising certificate fees in the event of a split.

Brexit a year later effectively shelved those plans for a while, although in April 2020 the SRA became a distinct legal entity within the umbrella of the Law Society, a move said to create more transparency about each party’s distinct roles and responsibilities.

As the discussion document shows, in New Zealand the regulatory arm is clearly the dominant function within the Law Society.

Of course the UK experience is not a given should the same happen here, but Shoeshine thinks it should be strongly considered in any proposals.

Instead, the establishment of a fully independent regulator should be a key recommendation on the back of this review.

Such a change was a chief recommendation of a similar review in Scotland a few years ago, while the Attorney General of British Columbia recently announced a new independent regulator would be established there.

When former Russell McVeagh partner James Gardner-Hopkins was found guilty of six charges of misconduct by the Lawyers and Conveyancers Disciplinary Tribunal last June – the incident which kicked much of this off and attracted international attention – prominent local #MeToo advocate Olivia Wensley told RNZ the Law Society had a clear, unmanageable conflict of interest.

“It just doesn’t work – regulatory and administrative functions need to be separate like other countries. Currently the fox is hunting the hen house where there is no incentive to investigate what is essentially its own client.”

It’s been a torrid few years for the legal profession and the review must recommend the establishment of an independent regulator. It’s the clearest way to start rebuilding trust.

Hamish McNicol is a Shoeshine columnist and co-editor of NBR.