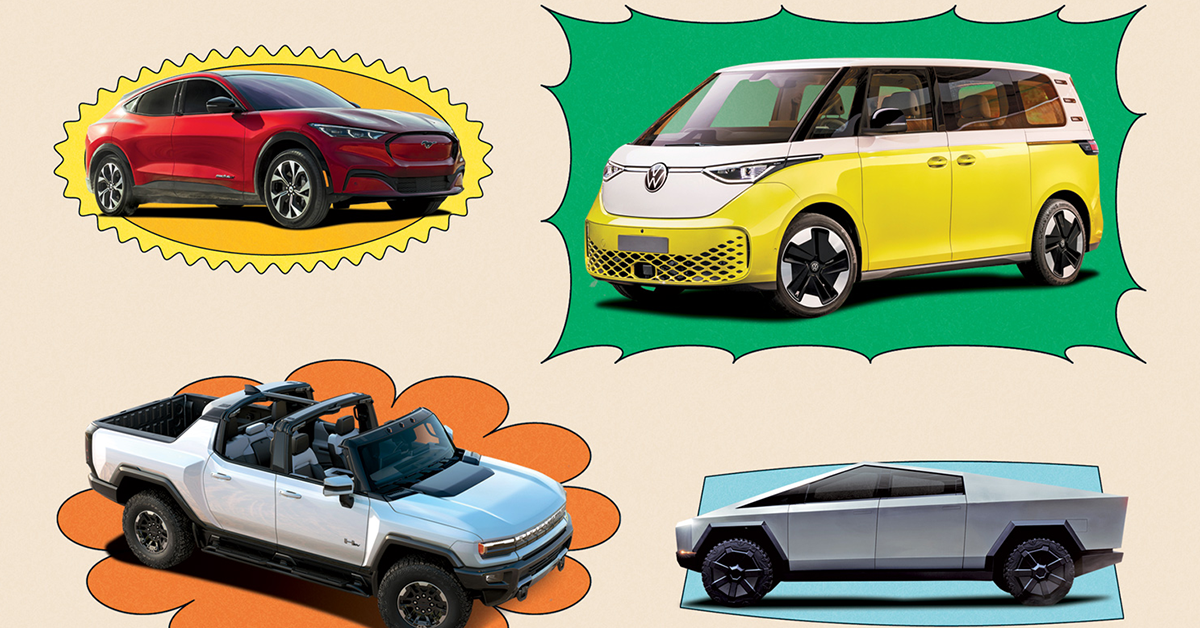 The electric vehicle revolution is here. From Hummer to Hyundai, the biggest manufacturers are sending greener cars, buses and trucks on the road. The shift from gas-powered cars to electric ones is gaining steam among drivers, too: 71 per cent of Canadians said they would consider an EV as their next vehicle, according to a 2022 survey by KPMG.

If you’re actively looking for a new drive or slowly considering a switch, here are nine of the best new EVs new, or coming soon, to the market.

Polestar, Volvo’s electric and performance arm, already has two other EVs on the market. The O2 is its concept sports car. It has a splashy design and comes with a built-in drone that can launch mid-drive to film scenic routes. What’s more, Volvo labels the metals used in the body to make recycling easier in the afterlife.

Tesla hasn’t confirmed when its Cybertruck will hit the market, but the vehicle’s design is already making headlines. The geometric Cybertruck will have a towing capacity of 6,350 kilos, and the fastest three-motor model will be able to reach 100 kilometres per hour in under three seconds.

Preorders of the Rivian R1T pickup start arriving in Canada mid-2022. The truck, which starts at $85,000, comes with 5,000 kilograms of towing capacity and the latest tech, including a large touch screen with LTE and wifi connectivity. It’s also set up for outdoor adventures. Plug lights or a heater into the 120-volt outlets in the back, or pull out the Camp Kitchen, a fully functional cooking area with two heating elements and a sink.

Canadian city dwellers would probably be better served by something nimbler than the SUVs and pickups that clutter urban streets. Enter the electric Mini Cooper SE, a full-battery version of the compact British car. It’s hard not to fall for the mix of go-kart handling, city-friendly size and cute character.

Hyundai’s transformation from jalopy maker into one of the world’s best car brands continues apace with its shift to EVs. The Ioniq 5 swaps the understated styling of its gas peers for a look that is slick and modern. The car comes with a spacious interior and innovative tech—it has a display with augmented reality that can project driving directions on the windshield—and it starts at under $50,000. It can go about 480 kilometres before needing to be charged.

The beloved Volkswagen Bus of the 1960s and ’70s is getting an upgrade. The new ID Buzz is a greener option for families or road-trippers. It has 170-kilowatt charging, which means its battery can be boosted to 80 per cent in 30 minutes with a powerful charger. The ID Buzz will hit European markets later this year and gets to Canada in 2024.

The name “Hummer” conjures the image of a gas-guzzling monster that’s impractical for city driving and, let’s face it, obnoxiously designed. But GM plans to change at least some of that with a switch to a Hummer EV. Among its innovations are a high-definition 31-centimetre driver-information screen and the ability to “crab walk,” which means the truck can move diagonally through tight off-road spots.

Fast and luxurious, Porsche’s Taycan starts at a cool $120,000 and goes up to $220,000. It comes with gobs of customizable features, like coloured seat belts and noise-insulated glass. A full charge can get you between 320 and 365 kilometres, and it has impressive acceleration too—from 0 to 100 kilometres in four seconds.

The all-electric Mach-E has solid range and a roomy interior, and it looks bougie too. The sportiest model—the GT—can hit 96 kilometres in 3.7 seconds, and the crossover gets up to 490 kilometres per charge.